According to Lyubov Serdynych, the author of the textbook "From the People's Source", it is in this sequence that the pro-Ukrainian prosecutors celebrated these holidays.

"With the attributes of carolers  (star, masks of the Devil, Death, Soldier, Goat, Grandfather, Grandmother), a group of  young people went to the village, wishing Merry Christmas. Christians associated this holiday with the birth of Christ and called it the Nativity.

An interesting argument? Well, in the following we quote an excerpt from the book in full and without notes:

"Rejoice, rejoice, O earth, a new year has been born,  " they sang for a long time. The carol  is the goddess of the sky of the ancient Ukrainians, the mother of the Sun, the wife of Dazhbog, the main god of the ancient Ukrainians. Its name comes from the word  Kolo (original name of the Sun). The holiday of Christmas, the sun, the pagan holiday (itself a national holiday), was so popular that it forced the churches to subordinate this holiday to Christmas, at the same time. The birth of the Son-Sun by the mother Kolyada was replaced by the motive of the birth of the Son of God by the mother Maria. And the words of the folk song "The new year is born" were replaced by the churchmen with "The Son of God was born". In Soviet times, the "Son of God" was again replaced by the original "New Year". All the rites of the Christmas holiday have been preserved from the ancestors and are completely national in nature, but now they are mixed with Christian symbols.

While caroling, they did not just greet the holiday and not at all to send away guests. In ancient  times, caroling had little magical meaning.  When the Sun was completely exhausted, Chernobog sent to the land of the insidious Korochyn, so that he would steal the Sun and protect him from the people and the people from him. But the sun could not die! People prayed for the Sun and saw how it, bathed in water, came to life, rising above the earth, new and strong. And the evil Chernobozhychi ran away, and spring came to earth. In order to support their light, people sang loud songs to the choir, so that they could begin. They glorified the sun, the moon, the stars, the rain.

These songs were called carols, because the Sun in them was a carol (circle). Everyone greeted each other, went to inform the German, the old, the children about the rebirth of the Sun, about the victory over the dark forces. The sign of this  was the sacred fire: the sign of the Sun (6-, 8-, 12-ray stars).  They played roles, among which were dark forces: Devil and Death. We dressed up as a Goat, a Bear, a Horse, a Gypsy. The master and mistress were called the Moon and the Sun. The ancient ceremonial form of the Ukrainian National Theater took place: the nativity scene. The name comes from the Ukrainian words of faith, vortex, which meant "to break out, to return, to be reborn, to grow." And warmth is the blessed warmth of the flow of light cosmic waters, the world river.

The age of Ukrainian Christmas is about 10 thousand years. This is the age of agricultural culture of Ukraine. The nativity scene is not a spectacle, as it is now, but a ceremonial ritual, in which the main ritual moment was a song-prayer: a carol. Vertepniks-carolers were called fateful guests, because once a year they brought good news about the birth of the Sun, wished a good harvest, scared away the dark forces with the fire of the Sun-star. They were gifted for this. An important element of the nativity scene is laughter: a saving thing that scares away evil spirits and evil spirits. 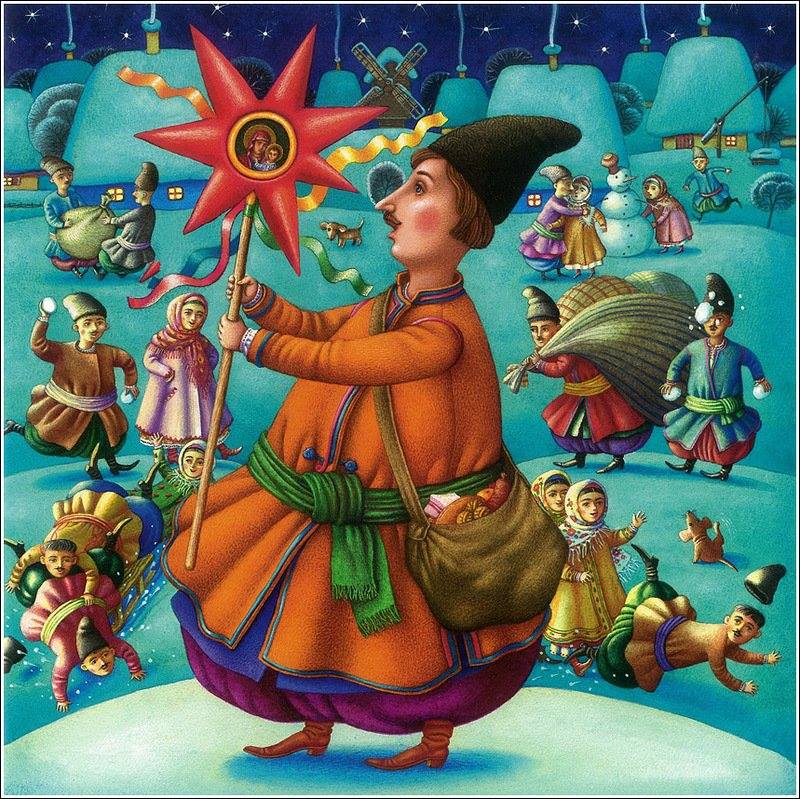 Our ancestors believed that their magical actions could help nature survive. The goddess of the sky, Kolyada, gave birth to a new sun. Kalita  - round, like a circle, korzh - also symbolized the sun (circle). The boy on the couch, who embodied evil spirits (Korochyna), tried to steal the sun, to bite the cake. The Christmas carol is also celebrated in winter, in December, when the days are shortest. And in Christian times, the church combined this ancient rite with St. Andrew's Day.

The culmination of the great mystery of the birth of the new sun and year is  Christmas Eve (Willia) . And now more and more  Ukrainians celebrate Christmas at the end of the year, on December 22-25, in the old style, because it is at the end of December that the Sun is born and the day increases. "