1. Lviv Opera has been around for 116 years. It was visited in the distant 1900s, when Lviv was ruled by the Austrians. Architect - Sigmund Gorgolevsky. It is said that a few years after the construction, the foundation of the building began to crack, and the architect was so excited that he died. Yes or no, but the fact is that he was buried in Lviv in Lychakiv Cemetery. By the way, Lviv Opera is considered one of the best in Europe. And it still stands, by the way, right next to the Poltva collector! .

2. The city of Lviv is an outpost of Ukrainian Greek Catholicism. It has the largest number of Greek Catholic churches in Ukraine. Last year, a monument to Metropolitan Andrei Sheptytsky, the leader of the UGCC in 1901-1944, was unveiled in Lviv. The author of the monument is a sculptor Andriy Koverko, architects Ihor Kuzmak and Mykhailo Fedik. 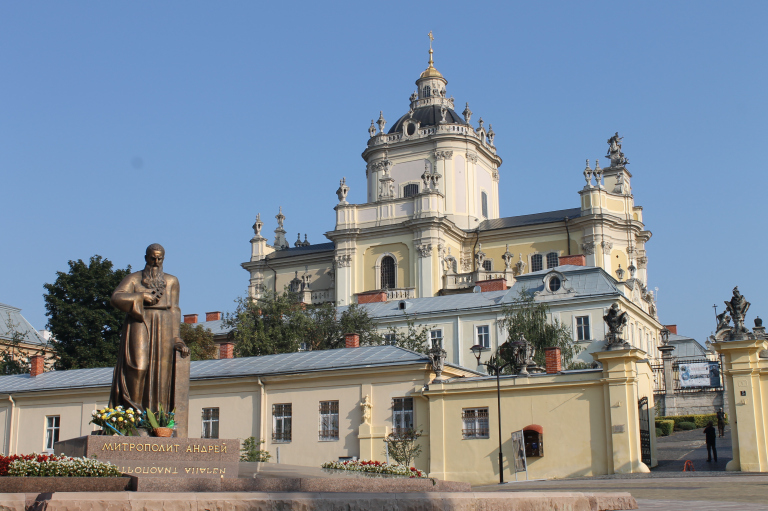 3. Lviv Post was the first in Ukraine. It was opened by the Italian businessman Roberto Bandinelli. He hoped to make good money on that business, but the expectations did not come true - letters at that time were delivered by carriage and correspondence was an expensive task. It was worth delivering a letter from Lviv to Gdynia or Gdańsk as a worker's daily wage. Delivery time - 4 days . 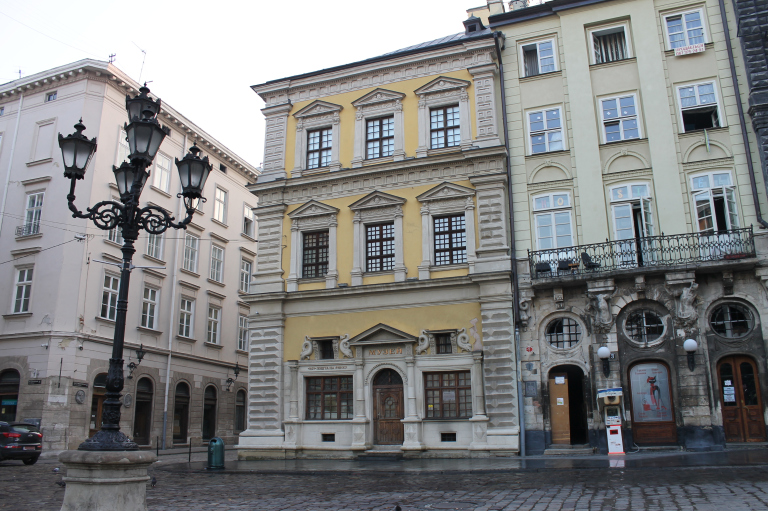 4. In this house lived the famous Greek merchant and philanthropist Constantine Kornyakt. He is known for generously giving money to the Assumption Orthodox Brotherhood. In particular, he donated 1000 zlotys (a huge family at that time) for the victory tower, which was named in his honor - the tower of Kornyakt. Although the fraternity was predominantly Russian-Ukrainian, the wealthy Greek felt a spiritual kinship with them  - the  city ​​was predominantly Catholic. 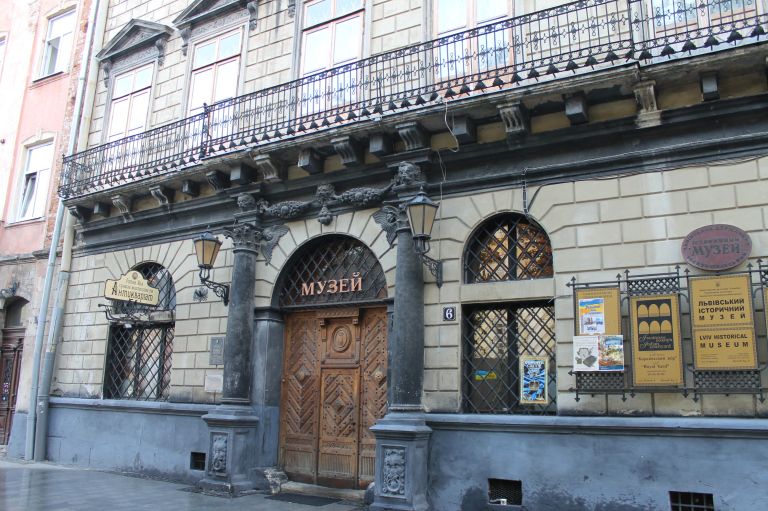 5. Tourists in Lviv - at least spare. Of course, we are still far from Prague or Vienna, most of the big cities of Ukraine have already been overtaken. In 2019, Lviv was visited by more than 2.5 million people (before quarantine). After quarantine restrictions, the figure must reach and exceed the previous record. 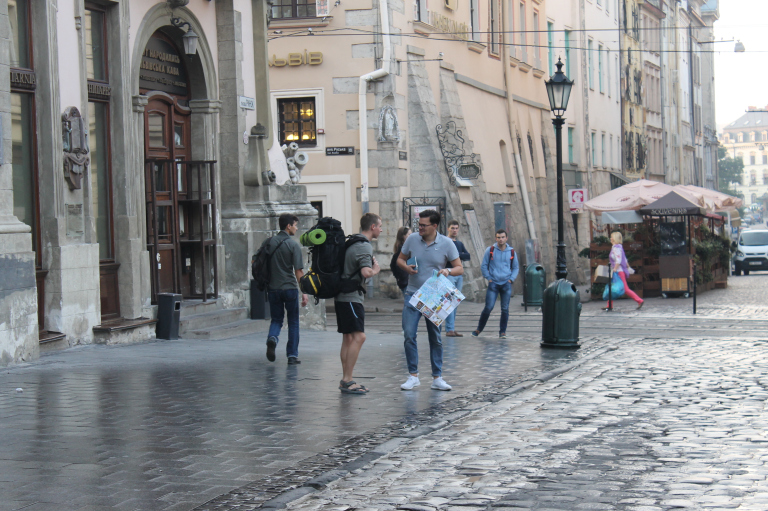 6. Diana - one of the 4 characters of Greco-Roman mythology, the sculpture of which stands in the center. They were made by the Austrian Hartmann Witwer in 1797, when the "old town hall" and the magistrate were still standing. However, some historians believe that the sculptures were made in the 1820s. 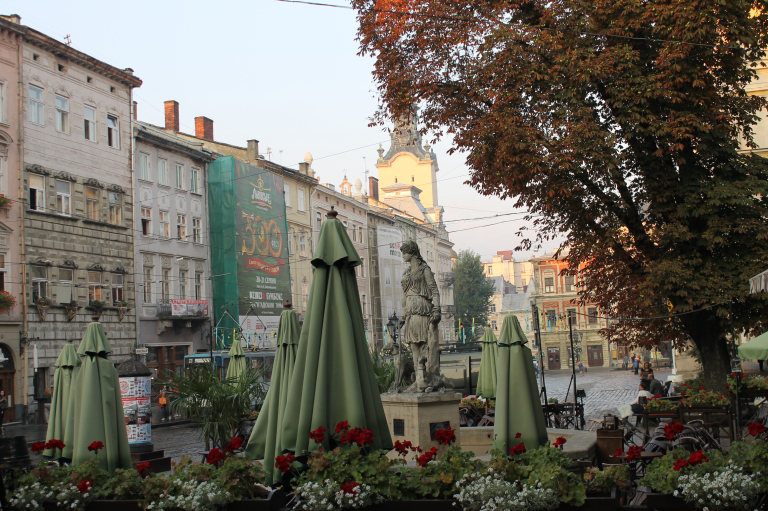 7. Historic balcony. On June 22, 1941, the Soviet-German phase of the Great War began. On June 30, the Germans came to Lviv. As many Ukrainians viewed Berlin as a possible ally in the struggle against the Kremlin, the OUN proclaimed the "Act of Restoration of the Ukrainian State." Of course, the restoration did not take place - it was never included in the plans of the leaders of the Third Reich. And the balcony is interesting because it was from it that Yaroslav Stetsko read that Act. 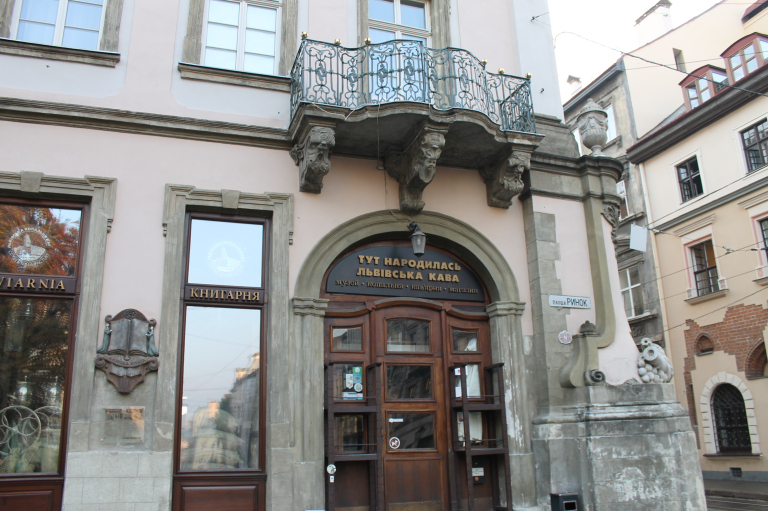 8. The number of coffee shops in Lviv is growing every year, even despite the pandemic. And no wonder - for many the city of Leo in the first place the city of coffee and chocolate. However, locals do not often sit in such cafes - takeaway tea / coffee often costs from 40 hryvnias. 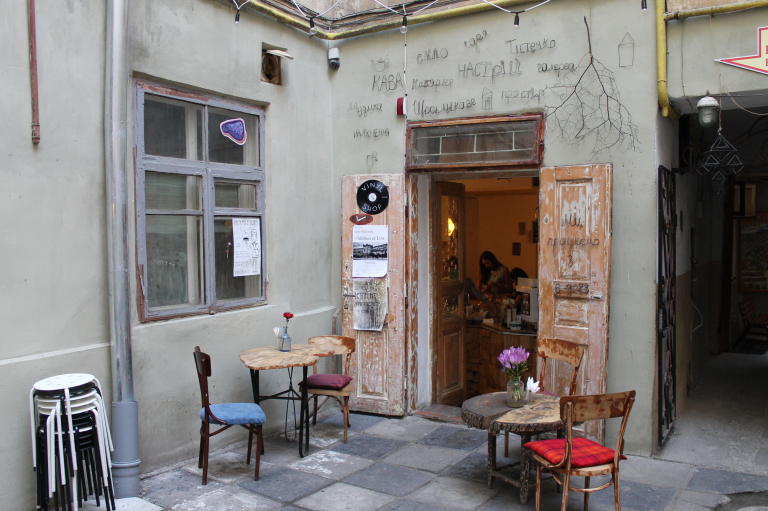 9. Lviv - a city that has survived dozens of rulers. Founded by the Russian prince Danylo Romanovich, it was both under Poland and under Austria, and part of the USSR. Lviv is now the official cultural capital of independent Ukraine. This status was granted to him by the government in 2009 . 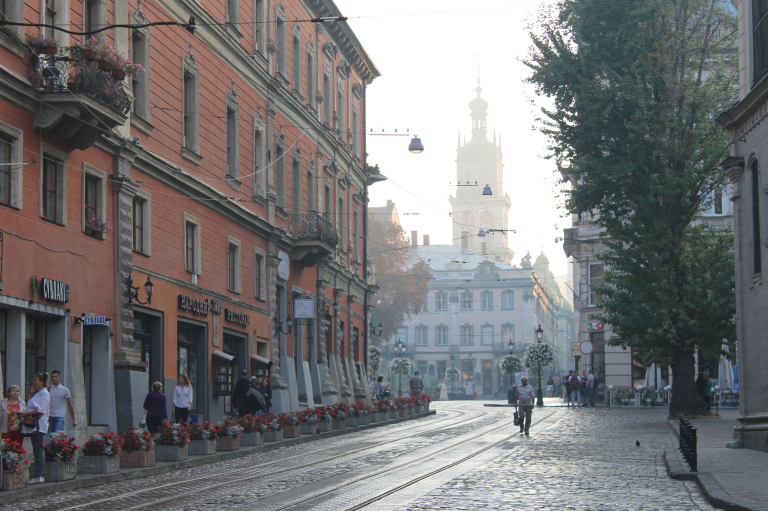 10. Lviv first saw the cobblestones in 1487. At least, there is such a record in the old chronicles of the city. Then you changed the trimmings many times. But in the 1780s there was an interesting story about which Austrian newspapers wrote. The emperor of Austria came to Lemberg (as the Germans and Austrians called Lviv) and his carriage was simply stuck in the middle of the Market Square across the street. It was possible to pull out the emperor's carriage with a pair of oxen. After that, the emperor ordered that the Market Square be carefully covered with paving stones. Probably, some cobblestones in the center still "remember" grandmother-Austria. 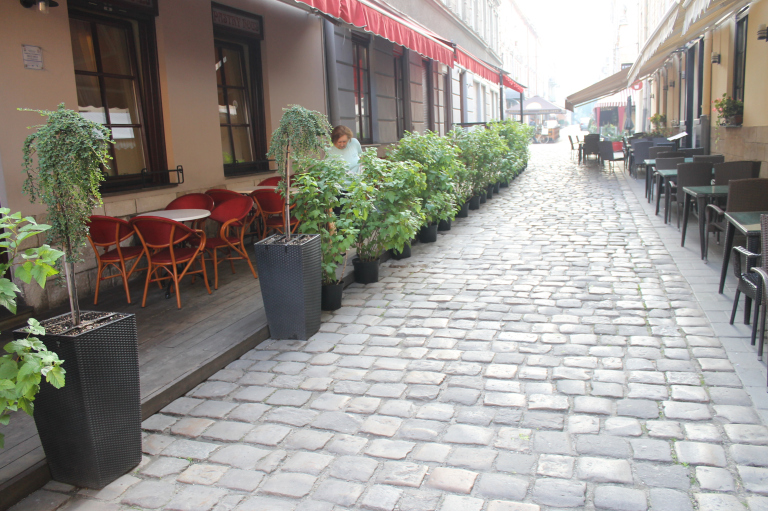 11. Many Lviv residents travel around the city by bicycle. In general, cyclists in Lviv have existed since the end of the 19th century - only then a bicycle was called a wheel, and a cyclist was called a wheelwright. Now Lviv can be called the cycling capital of Ukraine, because the cycling infrastructure is actively developing here, but we still have a long way to go. 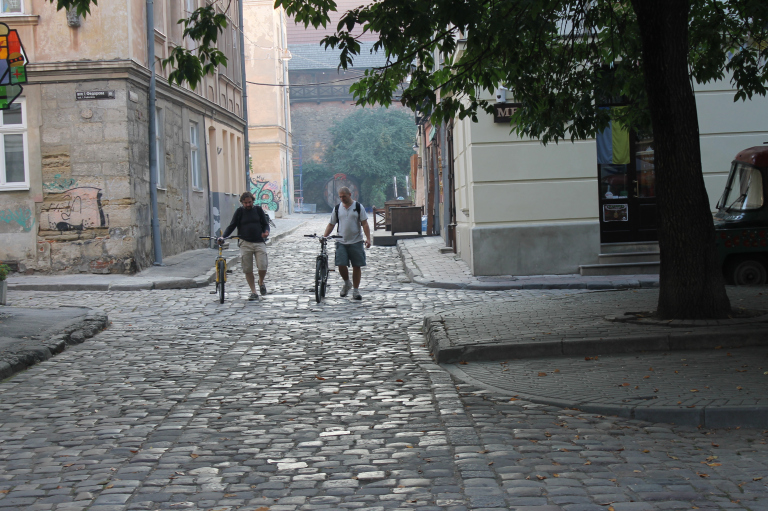 12. The world-famous Polish science fiction writer Stanislaw Lem studied at this school (pictured below). Lem's works have been translated into many languages. The writer himself was born and raised in Lviv, but in 1939, when the Soviets came, he left the city forever, moving to Krakow. In his opinion, the Soviet government forever ruined the "old Polish Lviv". By the way, writer Markiyan Shashkevych and musician Ilko Lemko studied at the same school. 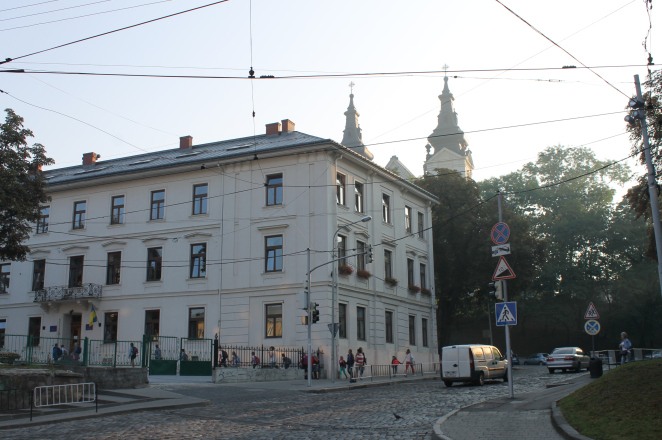 13. Bogdan Zenoviy Khmelnytsky himself studied at this school. However, at that time he was not a hetman, not even a Cossack - but simply a smart and capable young man who wanted to get a good education. In the Middle Ages, Orthodoxy, to which Bogdan belonged, did not have many good educational institutions, and Catholics, on the contrary, offered miracles. Tyt Khmelnytsky studied various sciences, in particular, philosophy, rhetoric, Latin, and law. At the same time, the usual school №62 and the chess school of the international grandmaster Vasyl Ivanchuk, the vice-champion of the world in 2002. 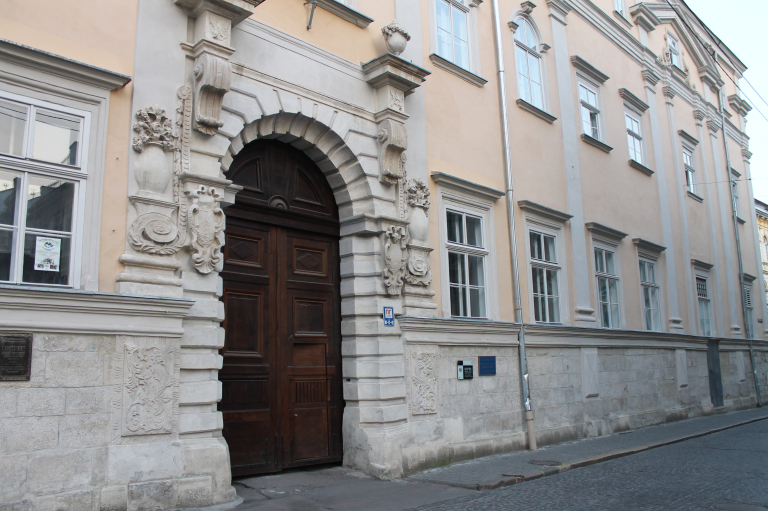 14. From ancient times there was a large Jewish community in Lviv. Medieval Lviv descendants of Abraham in Yiddish spoke. And since before 1939 they had hundreds of shops in the city, the inscriptions were often Hebrew (as well as Polish and German). 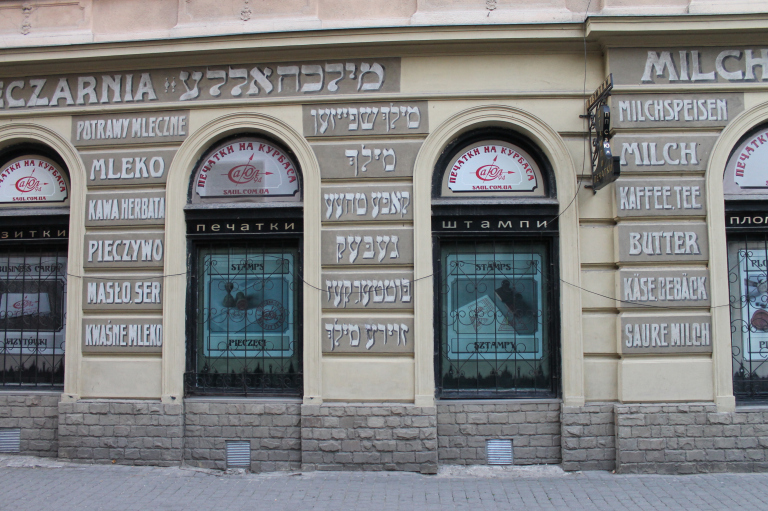 15. Ivan Pidkova never lived in Lviv. But a monument to him was erected for another reason - the famous Cossack leader was executed by order of the Polish king Stefan Batory. Horseshoe with the Cossacks frequent attacks on Tyrechchyna, so Sultan Myrad III gave the Polish king the ultimate - either war or Ivan. The king was not ready for war, so he chose the latter . 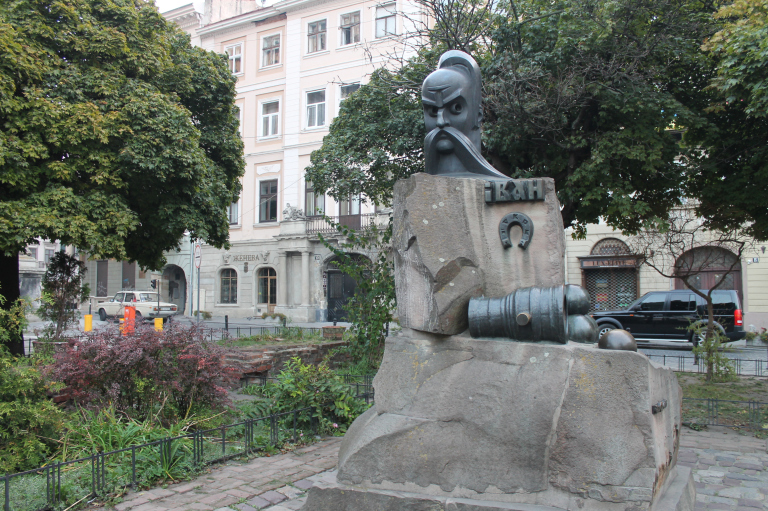